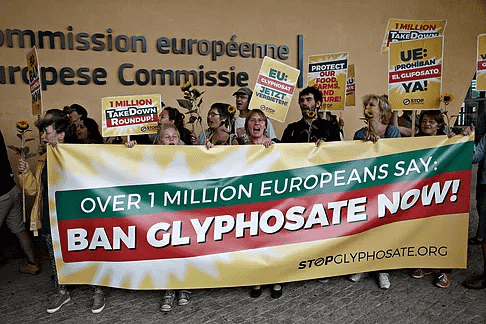 Dr. Stephanie Seneff, Senior Research Scientist at Massachusetts Institute of Technology (M.I.T.), presented at the Institute of Sustainable Nutrition on March 24th, 2018 on the health effects of glyphosate. Dr. Seneff was one of two featured speakers on the topic of Glyphosate, the other speaker was Dr. Don Huber an expert in Glyphosate and the impact on our health. Dr. Seneff has also appeared in health related documentaries, such as What’s with Wheat, provides her expertise on the dangers of the herbicide Round Up and the link to many diseases such as Autism, Alzheimer’s and several autoimmune disorders.

Dr. Seneff started with some statistics that provide a snap shot of our current health situation in the United States. A few of the statistics state that the United States consumes 50% of the world’s pharmaceuticals, spends more on health care than several countries combined, is last for infant mortality, has more chronic disease and consumes 20% of the world’s Glyphosate. She explained that Glyphosate is Round Up and widely used to kills weeds and produces faster yielding food crops such as corn, soy, sugar beets, cotton, tobacco and alfalfa. The weeds however are getting smarter, and more herbicide is required each year instead of less.

The main toxic effects of Glyphosate are the interference with the function of P450 enzyme in the liver, chelates to important minerals, interferes with synthesis of amino acids and disrupts sulfate synthesis and sulfate transport. Dr. Seneff presented several slides on studies done on the correlation of Glyphosate and conditions such as Dementia, Cancer of kidney, thyroid and bladder, and Autism. Glyphosate is patent as an antibiotic and is shown to cause people to become antibiotic resistant due to the exposure of such high amounts in our food.

Dr. Seneff explains how Glyphosate disrupts the production of the protein synthesis of Glycine. The protein grabs Glyphosate, which is present, instead of Glycine and destroys the protein from doing its job. The protein synthesis of Glycine occurs in plants and our gut biome. The swapping of Glyphosate for the Glycine has altered the DNA protein, which gets rid of the Glycine instead of destroying the Glyphosate. This may result in several health issues including impaired CYP P450 enzymes, neurological diseases, autoimmune diseases, chronic fatigue syndrome, osteoarthritis, fatty liver disease, obesity and adrenal insufficiency, kidney failure, insulin resistance and diabetes and cancer. Glyphosate has also been shown to impact pregnancy, shortening the gestation period and disrupting hormones.

Dr. Seneff refers to the work of scientist Dr. Anthony Samsel, who studies the impact of Glyphosate on bone, finding the highest concentration in bone marrow. I find the following quote by Dr. Samsel to be incredibly scary. “Glyphosate is not toxic in the conventional sense. It destroys our biology at the cellular level one molecule at a time through disruption of proteins and signaling. Integration of glyphosate with globular and structural proteins is how it can be the cause of an endless array of unrelated diseases, and unleash a cascade of ill health effects that kill us like a slow cumulative poison.” We are poisoning ourselves slowly, causing our own chronic disease and potentially death.

Dr. Seneff makes a connection of Glyphosate to food allergies and autoimmune diseases. Glyphosate sets up leaky gut, creating a weaker immune system and blood brain barrier allowing foreign substances to enter the blood stream that should not be there. The body sees the foreign substances, proteins that have not been broken down properly in the gut, and develops an active antibody response to the protein. This can lead to autoimmune disorder, also explains food allergies and gluten intolerance including Celiac Disease.

There are other connections where Glyphosate contaminates live vaccines, which Dr. Seneff presents the correlation to issues with the MMR vaccine. Glyphosate is also found in the body where there is collagen. About 25% of the body is collagen, and 25% amino acids in collagen are Glycine, which can be swapped out with Glyphosate. Collagen is found in our bones, joints and vasculature. Dr. Seneff suggests there is the connection to Rheumatoid Arthritis as the Glyphosate is found in the ligaments and joints through the presence in collagen.

Glyphosate is also impacting animals. Diseases in bats, bees, ladybugs, frogs and starfish are documented in areas where Glyphosate is present. It is impacting and changing our environment and food source. Dr. Seneff suggests to by organic and grass fed foods when possible, to reduce our exposure to Glyphosate and consume Probiotics to strengthen the gut and immune system.

I appreciate the information and my new awareness, since this program, on Glyphosate and the health risks along with its wide use on our food system. It is frightening that we use a chemical that is linked to so many harmful side effects in exchange for money. Where does humanity live in all of this craziness we have created? I think about the harm I may have caused my daughter, Lilly, who recently we learned has food sensitivities. I struggle with what to eat, what to buy and how to afford the foods I really want. I have been making changes to what I purchase in the grocery store and where I am purchasing my produce and meats. We have also put in a much larger garden with more vegetables and herbs. Just yesterday I shook my head as I passed a facility worker spraying weeds on campus. On his back he had a small tank that was labeled “Round Up”. I wondered if he knows the potential danger by exposing himself to Glyphosate. It will be interesting to follow in the news to see what the outcome will be in the future years and when Glyphosate will finally be pulled off the market forever.