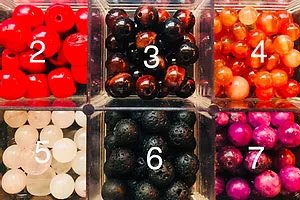 Since I first began Fifth Element Beads, my aesthetic goal has been to design jewelry made from my hand made clay beads and accented with simple beautiful stones. At first I selected stones based on their visual appeal. But, soon I found out that customers were more interested in metaphysical properties of stones. One friend, a recovering alcoholic, requested amethyst, also known as the “sobriety stone”. Another friend was looking for onyx as a traditional 7th anniversary gift and because she also knew onyx can transform negative energy into positive energy. When I realized how important it was to my customers to choose their stones mindfully and with deep intention, it was time for me to embark on yet another educational journey – this time to gain a deeper understanding of stones.

My first stop in learning about the metaphysical properties of stones was Brian Robertshaw – my bead guru. Brian is the owner of Beadniks in Brattleboro, VT and an extremely knowledgeable bead historian. My first question for Brian was “How did human beings begin attributing metaphysical properties to various stones?”. I was astounded to find out that the connection between specific stones and their metaphysical properties can be traced so far back in history that it is near impossible to discover their origin.

One thing that I learned through the MALT program at TGI is the incredible power of human intention. We may not, at this moment in time, have scientific data that proves rose quartz can bring love into your life. However, over several centuries and across many different cultures, humans have attached a powerful and universal intention of love to this particular stone. That is what I believe accounts for the magic I see happen when a customer puts on a rose accented bracelet and carries on that universal and timeless intention of love.

As some of us get ready to begin a new school year, why not go into it with some powerful intentions and stones to support those intentions? Here is a brief guide on just a few stones (pictured) and their metaphysical properties:

1 HOWLITE is very common and naturally is a white opaque and chalky stone with beautiful gray and black marbling. Because of howlite’s ability to hold color, it is often dyed a teal blue and called “Chinese Turquoise”. Howlite is a calming stone that can help with stress and anxiety.

2 CORAL , along with shells, was one of the earliest materials used to create beads. Coral can naturally occur in a range of orange and reds but is often enhanced to brighten its color when used in jewelry. Coral brings peace and facilitates intuition.

3 TIGEREYE is found all over the world and has been used by people in various cultures for centuries because of both its beauty and its metaphysical properties. It is a shiny brown stone with marbling in golds, yellows, and reds. It was named tigereye due to its visual resemblance to the actual eye of a tiger. This stone is great to have to overcome obstacles, take action and access one’s own power. I have also had customers who use this stone to help them get through tough mercury retrograde periods.

4 CARNELIAN is a personal favorite. Carnelian is a translucent stone that comes in a range of oranges. It has beautiful color naturally without any enhancement. Carnelian is the stone of true creative expression. I have heard that the pop star, Adele, will not step on stage to perform without carnelian on her person.

5 ROSE QUARTZ is all about love. Even if you know very little about stones, you might know that rose quartz is associated with love and has been since as far back as historians can trace. Quartz, in general, is known as “the all purpose stone”. Any kind of quartz is good to have and there are several types. However, if you are looking to bring more love into your life, rose quartz is the stone to have.

6 LAVA ROCK is a good stone to utilize when you are feeling a need to connect more with nature. Lava rock helps us become more rooted to the earth. Additionally, lava rock is a porous stone that is ideal for holding essential oils which makes it a very popular stone for beads.

7 LEPIDOLITE is a lesser known stone but is actually quite common. Lepidolite is known as the stone of transition. It often helps us to overcome emotional troubles that tend to accompany times of significant transition.

Ingrid Baron is the owner of FifthElementBeads.com